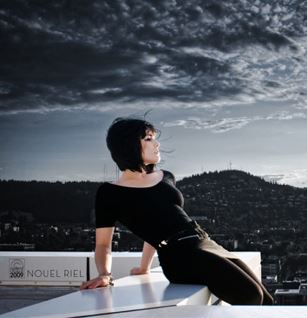 It is the easiest thing in the world to just pick your camera up and hold it horizontally to take the picture. Cameras are designed to be naturally held this way but it produces an image in what is called a landscape format, where the picture is wider than it is tall. As the name suggests, this is very good for landscapes.

Turning the camera on its side will produce an image in portrait format (taller than it is wide) that is much better suited to pictures of people. It’s obvious when you think about it, people are tallerthan they are wide so they will always fit the frame better if the camera is held this way round.

Using the camera this way might feel slightly awkward at first but, with a little practice, you’ll soon get used to it. The only times a landscape format works best is with a group of people or if you go close enough for a “head and shoulders” shot or you deliberately want to include something else in the background of the shot.

A general rule for a good photograph is that the subject “fills the frame” and, once you have turned your camera on its side, this becomes much easier to do. It’s almost essential if you want to include their whole body but you would only need to do that if what they were wearing was important to your picture.

Normally it’s best to go in until there is just a little space either side of them and a little more space above their heads. This will usually mean you are cutting them off around the waist. For various technical reasons, it is better if you don’t get physically closer than about 6 feet (2 metres), especially if you are using flash.

Another thing that makes a good photograph is if there is nothing to distract the eye from the main subject. Filling the frame will help a lot with this but every subject has to have something behind them so try to keep this as plain as possible. The sky (especially on a cloudy day) might be the most obvious choice but it’s not usually the best.

This is because it is much brighter than it looks to the human eye and, unless you know how to compensate your exposure for that, may give you an underexposed picture. Even when you do compensate, there is a great danger of your subject’s hair just disappearing into the washed out sky. This hardly ever looks flattering.

Be careful if you have a zoom larger than about 4X because it may be difficult to avoid camera shake if you zoom right in with one of these. Ideally, you would use a tripod in these situations but that’s getting a bit beyond the realms of simple photography.

It’s great when the sun comes out. All the colours are brighter and people find it much easier to smile. However, bright sunlight produces hard dark shadows which can have a very unflattering effect on someone’s face if they are at the wrong angle. It is much easier to take pictures of people on a cloudy day because, no matter which direction they face, the lighting won’t change too much.

Of course, we can’t control the weather so probably the best thing to do on a sunny day is to find a shady spot to take your photograph. In order for this to work best, the background, the subject and the camera should all be shaded from direct sunlight.

When there is no shade to be found then you should consider the angle of the sun relative to their face. There are two positions that minimise the effect of shadows cast by the sun. If your subject stands almost directly facing the sun then the shadows on their face will be at their smallest. Don’t have them absolutely directly facing the sun or you might get your own shadow into the shot.

Another option is to have the sun behind them so their entire face is in shadow. Again, don’t have the sun directly behind them or you could end up with some flare in your picture. You may have to adjust the exposure for this type of shot but it’s the best set up if you can also use “fill in” flash on your camera.

Having sorted out the background and the lighting, the next thing to consider is your subject and the position of your camera relative to them. Eyeline can mean different things depending on the context but here I’m just referring to your subjects eye level. This is ideally where your camera should be, at the same height as their eyes or very slightly below.

In professional portraiture, the height of the camera relative to the subject’s eyes plays an extremely important part in determining how they will look in the final image. Even slight changes of this aspect can make a profound difference. The most “neutral” place to be is at the same level and, unless you are making a portrait as opposed to just taking a picture, this is the best place to be.

When dealing with a subject who is much taller than you then you should think of asking them to sit down so you can get on their eye level. If that’s not possible, try standing further away and zooming in. This will reduce the angle at which you are pointing up and minimize the effect.

In most cases the problem arises when you are photographing someone sitting down or a child or even a pet. It is almost always going to be a better picture if it is taken from the eye level of your subject. You don’t need to take my word for it, try it for yourself the next time you are in this situation.

If you follow all of the above, you should be able to take a decent photo of anyone but that is still some way away from making a portrait, which is an attempt to show your subject’s character and personality as well as being a good picture of them. Once you have mastered all the tips, you might be inspired into taking this one stage further and stepping into the realms of portraiture.

For this you need to think about your subject’s pose and probably the simplest way to start is to avoid having them squarely facing the camera. Ask your subject to face about 45 degrees away from the camera or have them stand still and you move round about 45 degrees. Then ask them to turn their head to face the camera for the shot. This usually looks much better than just being square on and, if nothing else, will have a slimming effect on most people, which is often appreciated.

Which direction they turn usually doesn’t matter but a few people have a “good” side. The best thing to do is to try a shot from either side and decide what is best later on.

For better people pictures you should: turn the camera around for portrait format, fill the frame with your subject and always shoot from their eye level. Oh, and if it’s a sunny day, get into the shade.